Tried to install Pop! OS on my Pi, 22.04.
Doh! Reached under the desk for the SSD I’d burnt it on and nothing… went to inspect the Pi to see if HDMI was loose - duhh… I’d plugged in my vape instead of the SSD

Waste of time anyway - looks great but nowhere near ready for prime time. Slower than the 2nd coming. Firefox not installed, not even findable in snap store. Good old sudo snap install firefox.
Built in updater glacial to start - no progress bar. From CLI gives an error… lost the network connection on reboot, says its there, no IP picked up. Wireless seems okay. Wireless mouse gimpy…
The install is so stripped down, almost nothing you expect is installed by default but LibreOffice.
Tossing it, will stick to Raspian and Ubuntu 22.04

Nice! I’m going to try installing pop-os on my old T410 Thinkpad. Just downloaded the ISO and am currently using dd to transfer the ISO onto my thumbdrive. I was running FreeBSD 13.1 on the T410, but, I think I’m going to stick with virtual machines for the BSDs. 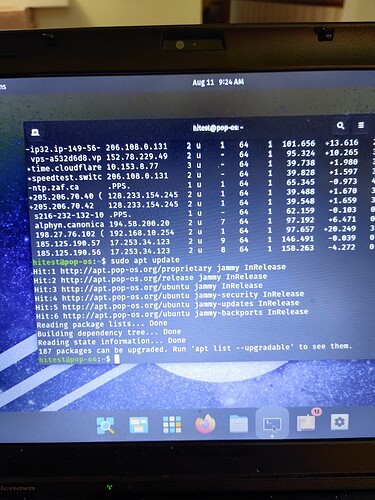 The last version of Pop! worked on an old laptop I had, it looked nice enough so I wanted to try it on the Pi4.
Looks like they may have stripped the ARM version down to run on older Pis as well or something.
It’s 2022 so I just forget about it if I need to apt install basic stuff like browsers, mail clients, gparted etc. I usually just add neofetch and gimp if I want to test a distro out very much.

I feel the same way about the iPhones. Would really like to get the 13 Pro now, but, I’m going to wait until the end of September when I’m in Richmond to get a hands on look at the 14 Pro.

I like actually putting my hands on things before I buy too. Sadly, the M2s are rolling out and not a single Apple reseller in Prince George has an M1 24" iMac, or Mac mini two years later. Saw an M1 Macbook Pro for the first time a couple weeks ago. $3500
we can order you one!
Guess what. It’s 2022, anyone on the planet can order one themselves and you won’t make a cent…

I’m quite excited about the iPhone 14 lineup. It’s a matter of wanting a Mercedes, but, I can afford a Toyota. I really would like to get the iPhone 14 Pro Max; it has the best specs. I’m really curious to see the iPhone 14 Max specifications. I’ll assume it has a better battery than the iPhone 14. The camera will not be as good as the 14 Pro. If the 14 Max has a decent amount of RAM I’ll go for that. If the 14 Max RAM is so-so I’ll get the 14 Pro on the Apple payment plan. Twenty four equal monthly payments with no interest.

I usually just go through the carrier’s plan, I never purchase a phone outright. Got frustrated at some friends who spent years and hours trying to save a dollar and gave them my old iPhone4, they’re still using it. They got a plan with a lot of Gigs and use it for Internet access on their farm as well.
Sold my iPhone6 to a friend for her kid for $100 and been using a 10 since they came out. I’ll upgrade when this term runs out most likely.
The biggest annoyance of all is people who want you to wait while they scroll through the pics they’ve taken since 2003 so memory is the least of my concerns, On a really slow day I will scroll through my photos and delete all the ones of the inside of my pocket, all but the best shots and I copy all to my NAS.
All of a sudden the iPhone will copy to my samba server again… (cross fingers as iOS is updating again)
I also discovered that the kids, whizzes w their phones are functionally computer illiterate… except of course w stupid FB

Those friends on the farm are also using an old single core Celeron laptop, she does a lot of Amazon shopping. At least once a week she sends emails to print off return labels for her they don’t have a printer.
Offered to give them one of the Dell i3s w SSD with a 19: LCD and my old Brother printer but they ‘don’t have the space’ for a desktop. - her house is WAY bigger than mine!
I have an HP laserjet in the box for over a year but that Brother will not die! I also found out that with every try of a Linux distro, the damn thing is already installed and working if I look in settings

I usually just go through the carrier’s plan, I never purchase a phone outright.

That is something I’ll definitely investigate. Right now I have a decent amount of data with Rogers and I don’t have a contract. However if they make a good offer on my monthly charges and a fair monthly toll for a new iPhone I would consider it. Apple is offering just under $60.00/month for the iPhone 13 Pro with interest free payments. Also with a phone from Apple it’ll be vanilla and not loaded with crapware from Rogers.

Never considered Rogers, they annoyed me when they originally came, offering USB Internet sticks under almost fraudulent terms and failing to note a landform that cut off a wide swath of the downtown service area. We spotted that years before picking a spot for the new community TV tower.
Bell and Telus whom I’ve both used don’t have any crapware on the iPhones. The last plan I did w Telus was about $50 a month towards the phone over keeping my old one, with $99 down and 2yrs of taxes on the lease up front. Easier than shelling out for purchase, one bill instead of two.
You’d have to look into it. My daughter’s a rep and would know but she’s off on medical leave for months now. In my case, it was a simple case of keep paying what I paid before and wind up with a better phone. (6S to 10XR) and more Gigs. Went with WANT over NEED as I was able to.

*I only once used more than 2GB on the old phone, decided to watch the News while I was out at the cabin.

Tried and failed to get High Sierra to run in OracleVM… Pop! 22.04 works there though.

In my case, it was a simple case of keep paying what I paid before and wind up with a better phone. (6S to 10XR) and more Gigs. Went with WANT over NEED as I was able to.

I’ll definitely look into it before I buy. I’ve been tinkering with Void Linux lately, mostly virtually. Today I did a clean install of Void and opted for the MATE desktop. I really like Void as it is not a derivative distro. It’s built from scratch with a nifty package management system and no systemd. 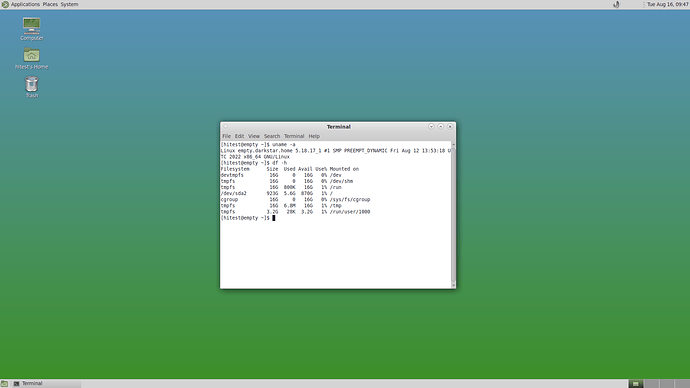 OMG 2022 and all these advances in communication devices and no one can communicate in the least!
-Eggh! Eggh! My computer SAYS…
-Won’t STFU when you’re talking to them…
-Ask you to show them something and keep getting up and walking away 45 year old office workers all have attention deficit disorders
-try to walk them thru over the phone and suddenly their phone or computer doesn’t have what every other one in the world comes with, a start button, a desktop, they’re suddenly forgotten how to scroll thru a list
Seriously thinking of fully retiring and just playing with computers for the rest of my life.
Major companies that just will not buy a $150 backup drive and lose all their records. Lawyers that get sold a gaming laptop at BestBuy w a 128 SSD and no idea of how to use the second 2TB D: drive. 90% of clients that look you in the eye and say “How am I supposed to know what my password is?”
Took a week away to walk my only daughter down the aisle and I’ve only been back since Tuesday.
But I did get a snicker. I was setting up Sage for a new work from home person… half way thru they sent me home as she called and was ‘reconsidering’ the job. Old fart like me still willing to do the jobs for some extra dough (and complaining about the lack of cooperation) and nobody else in the world wants to work at all…

3 people this week, told by RBC their iPhones were hacked, account locked and told to reset their phone.

Interesting! I’m a huge fan of iOS as it’s somewhat based on FreeBSD. I’m going to buy an iPhone this Fall. I’m very curious. Do you have an understanding of why the iPhones got hacked, locked? Weak passwords? iPhones not updated? Malware?

Nope. More of the understanding that bank employees know dick shit about iOS and tons about making excuses to cover their ass.
Not one of the people had a banking app installed and all claimed they’d never used their phone for banking.
The last guy spewed a lengthy tale of responding to an email about an invoice for something he never bought, etc, phoned the number - guy barely spoke Engish 0 install this so I can look at your web browser etc
and sure enough in both Firefox and Edge, he’d saved his bank login.
Or rather Windows did it all by itself because he’d never ever intentionally save his bank login on his computer… and didn’t notice how it logged in all by itself… isn’t it SUPPOSED to do that?

Maybe I’m really paranoid, but, I never do any banking on my Windows 11 laptop and I am careful not to save my bank login credentials. That’s disappointing that the bank employees were full of bullshit.
My thinking would be that doing banking using the app on an updated iPhone is a secure way to go.

Opposite, I haven’t set banking up on my iPhone yet, but always do it on my Win 11 computer.
They fixed that iOS security problem weeks ago and if they’re still ignoring that urgent update warning then I will STFU and take their $50.

Opposite, I haven’t set banking up on my iPhone yet, but always do it on my Win 11 computer.

I do a lot of my banking on my main Linux machine and some on my Oneplus 7T phone with the app.