This is the Visa security department. We’ve detected two recent transactions on your account; one charge of 342 dollars on Ebay and a one thousand dollar foreign money transfer. Please press one if you did not make these charges.
This is the usual kind of call that I get on my very rarely used landline. I don’t have an Ebay account. Criminals are getting inventive.
Does anyone fall for this nonsense?

So part of the latest approach it actually be not believable. It’s a quick filter. For example, remember when you’d get e-mails that were filled with bad English and spelling mistakes?

The idea is that if you can recognize that something is wrong, then you’d make a bad target anyway, and they don’t want to spend time trying to scam you.

But if you can listen to one of those recordings or pitches and not immediately hang up, then they’re thinking “this guy isn’t so bright, we can definitely scam him.”

So of course, the best response is to play stupid and stay on the line as long as possible. lol!

What’s really funny is that some people have automated dealing with spam phone calls.

Here’s “Lenny” – an automated “senile old guy” who you can forward calls to, etc. 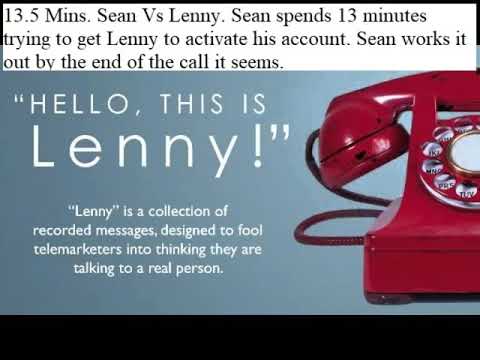 Whenever I get a scammer on the phone, I transfer them to Lenny.

But it’s for telemarketing calls, not for friends or annoying people.

This one Lenny kept them on the line for almost an hour! 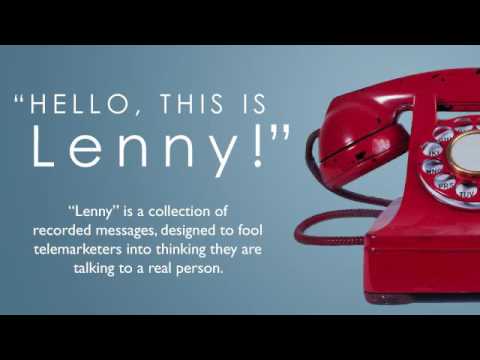 Clue #1
They call you because they spotted suspicious activity on your Visa card. Then the first thing they ask is what your card number is.
Duhhhh…
It is immoral to leave money in the hands of a fool

I’ve become so jaded, the stoopid deserve what they get.

One of my favourite calls several years ago involved a representative from Microsoft. He called me to let me know that there was something wrong with my Windows computer. I enjoyed that call a lot. He wanted me to download things and go through elaborate procedures. At that time I was not using a Windows computer.

I get calls on my cellphone from different numbers and the caller is speaking in Mandarin. I immediately block the number. I don’t know if that’s a scam. It is weird.

I never got spam calls on my cell. Plenty on the old land line.
Couple weeks ago they ‘passed a law’ blah blah blah BS and now I get calls on the cell at least once a day warning me of suspicious charges on the Visa card I don’t have.
We should have a branch of the RCMP like the FBI does on tv that goes into other people’s country with gunships and drones and guns down people for breaking Canadian laws…

Yes, I’ve got several. Another variation of the one from Visa that always says someone bought a $1400 iPhone with the Visa I don’t even have.
My Amazon has 2 factor, so I’d get a proper warning text.

I’m sure there’s a 1-250-suckers poster in every call centre in Mumbai. I’ve met dozens of people who got suckered, some multiple times. Don’t bother to warn anyone… they’ll just think you’re some know it all and I’ll show him! and do it again.

OMG scam mail from @receiptbillinvoice.info saying my Amazon Prime account was suspended. How obvious can they make it and still draw suckers in! And a cutt.ly link, bever even heard of that one before…
Ever since they made spamming cell numbers illegal I’ve been bombarded with several a day…

“Hi this is Mike. I am calling you from the technical department. It’s about your computer.”

I promptly disconnected. The scammer is lacking imagination.

Yesterday I got 6 text messages from

{myphonenumber]@msg.koodomobile.com that there was an error in my Telus billing, click for refund…
all links were on is.gd a link compressor

Finger getting sore from hitting DELETE

Three robo calls today on my landline and counting. First one this morning I answered and there was just dead air so I hung up. Next two came in and I let them go to my answering machine and they hung up. Must be the Xmas scam season getting in to high gear. Assholes.

I haven’t had a landline since 2009 when we moved to Terrace. We got a new numberthen, and the only phone calls, literally, that we received in a year were spam. So we cancelled it after a year.

Haven’t had a landline since then

Now the only spam calls are from politicians, who conveniently exempted themselves from the spam laws.

We literally only have the landline for medical emergencies (my teenager has a life threatening condition) in the event that our cellular connection isn’t working. Rogers is the only service that works well adjacent to Mt. Hays.