VoIP phones. What do you think?

At our house we continue to have a landline that we rarely use. We have it for emergencies in the event of a cellular outage. I don’t know a lot about VoIP phone technology. Is this something worth investigating?

I haven’t had a landline since 2010, I think. When we moved to Terrace, we had a landline, and the only calls we received were telemarketers. So we got rid of it.

We were paranoid about depending just on cellular service, but sort of hedged that by having more than one phone / provider.

So if you and your wife both have cellphones, be sure one is on the Telus/Bell network, and the other is on the Rogers network. The odds are against both going down at the same time.

In our case, it was just a 7-11 speakout SIM on a backup phone. Never really had to use it.

These days, we have more cellphones, but still try to keep at least one on the Rogers network just in case. But I can’t remember if we’ve ever had a cellular outage here.

Not sure what the history of cellular outages are in Rupert, though.

Meanwhile, VOIP phones are ok, but you’ll need internet access for them. I use Fongo on my iPhone for when I’m travelling and need a Canadian phone number.

I wouldn’t replace a landline with a VOIP phone. I’d just get rid of the landline. lol.

Thanks for the reply, MiG! It is appreciated. Yeah that was my one worry about VOIP, that is, if the Internet goes out you’re hooped. Telus is a no go for us as we live adjacent to Mt. Hays and can’t get a good signal. So we’ll stick with Rogers and our landline.
Edit: added later. We lost cellular coverage with Telus due to a landslide on Mt. Hays. When I contacted Telus tech support they said it would be too expensive to repair the cell tower. I pointed out to them that I was paying $60.00/month for no service. They advised me to get a landline. Hahahaha. I still receive spam telemarketing calls from Telus on my landline.

Wow, does Citywest or Bell offer service that you could use at your place? Or is that whole neighbourhood just out of luck?

I dropped City West cellular years ago due to poor connectivity. I don’t know if they offer cellular anymore. Haven’t tried Bell. Rogers has the best coverage for us, I think they have a tower close to the container port.

Yeah, Bell will use the Telus tower as well. I’m surprised to hear they had a tower go down and didn’t replace it. 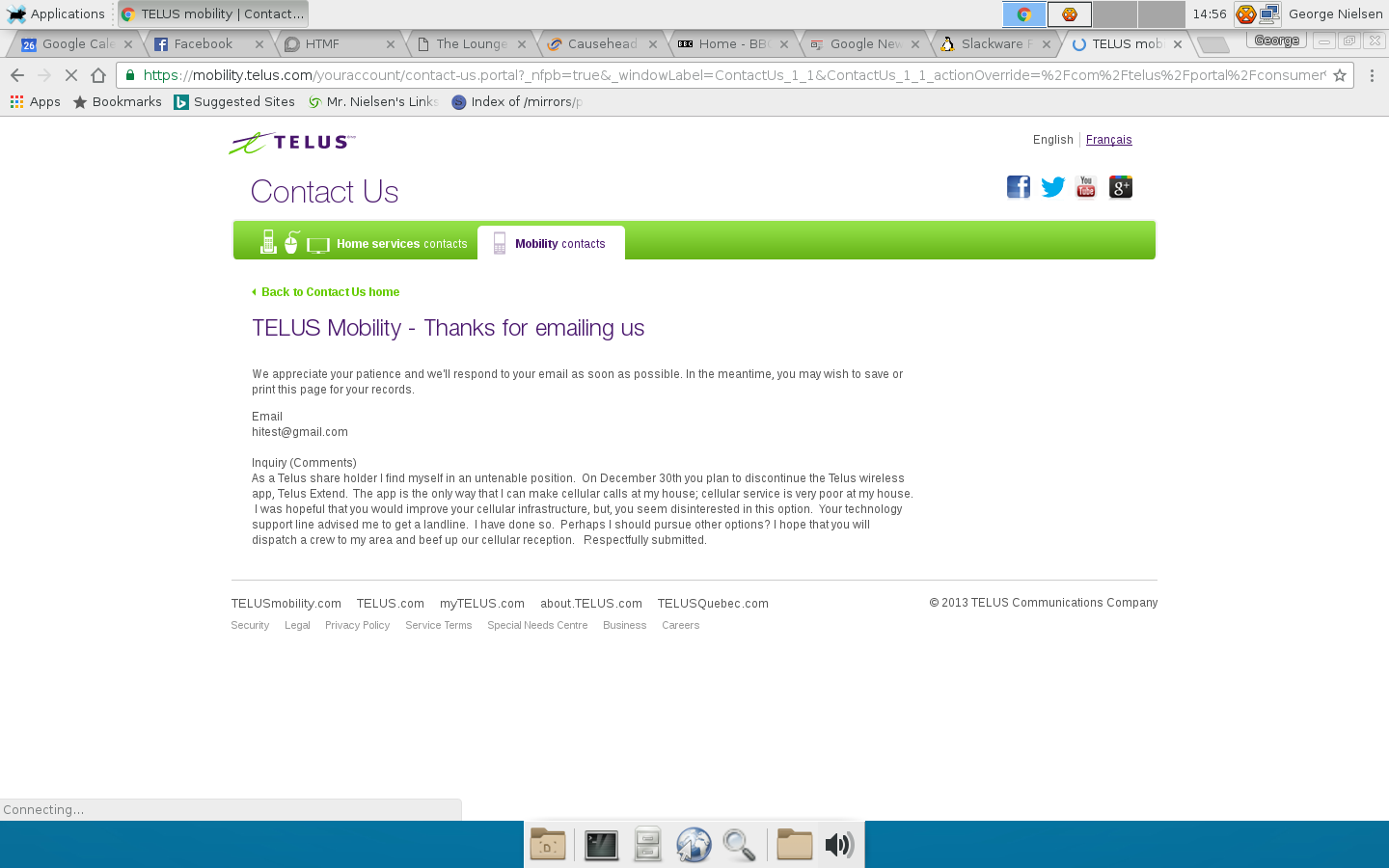 Friends have VoIP phone, big improvement over the last decade but it still sux.
Dropped calls, we often get RNA (ring no answer) when we call them and then they call back saying they’ve been waiting for hours expecting our call, voice mail unreliable, etc. All to save a whole $20 a month. Also its cell based with zero data included.
Gave them my old iPhone4 and of course they got the cheapest plan available and gripe they can’t use it as a hotspot, now asking who’s got the ‘cheapest’ internet…
Honestly, the old landline’s the most reliable. You can even yak your heart out whern the power goes out.

There’s something comforting about a land line.
That’s number I give instituion type relations. ( highschool, medical, provincial agecies) My cell phone usage during the day is busy enough without adding my landline contacts. I don’t mind paying for that, actually it’s probably bundled into the internet,/ tv package now that I think about it.
Hope all Htmf members and their families are well these days