The War and the cost of Gas

Like you I’m watching the horrific events unfolding in the Ukraine. The misery that the people are living through is beyond imagining. I hope the war ends soon.
I gassed up my unit this morning at the Chevron station here in Rupert; gas is at 1.99/liter. Ack!

it is kind of funny the gas companies blame the war for the price increase, but the price increase to a barrel of oil is always a month ahead , the $104 per barrel is for April’s oil so why does it go up right away when in 2020 the price of Oil went down as far as -$5, they couldn’t even give it away, but yet the gas price at the pump didn’t even get close to $.40 a liter, I am guessing at what the cost would be for just refining, transportation, excise tax and normal taxes, there should be no cost for the Oil itself for at least a month

Well, according to everyone here in Alberta, it’s Justin Trudeau’s fault.

so they blame trudeau but Alberta is going to have a nice surplus because of the world prices of oil, so they are happy and mad at the same time LOL

LOL is the only reaction for sure!

If our PM isn’t to blame then it’s likely Hilary Clinton behind all of it.

Yes its another gov’t conspiracy.
Even when everyone in the country knows the gas stations all raised their prices at the same time, even if they didn’t get a new gas delivery and they’ve done shit like that for decades and the gov’t can’t catch them…
here the same truck fills both stations at the same time. The one on the rez that’s closest to town raised prices twice on gas in the tank and the other didn’t, so for a few days there was a 29c a litre difference…
Gas is also 8c more in Vanderhoof where there’s triple the stations competing and it’s way closer to the refinery.

the problem is parkland owns about half the gas stations in BC, all of the 7-11 ones and the on the go ones, plus they own the major refinery in BC, so the refinery sets the price every week and gas stations pay it, if we had more options, IE trans mountain pipeline, then maybe the price would be about 10 of 15 cents less

I doubt the Trans Mountain pipeline expansion will have any impact on the price of gas, its the lack of refining capacity that is the problem. Shutting 3 refineries in the lower mainland had a major impact in that local region supply. The Parkland refinery can’t supply the South coast region so it is supplimented with refined product from Washington State. Here in the Northwest we are supplied by Edmonton and the PG refinery. Alberta supplies the interior, Okanagan and Kootenays from either the Trans Mountain pump station in Kamloops and tanker trucks from Alberta. We get screwed here in Rupert with additional shipping costs.

its the lack of refining capacity that is the problem. Shutting 3 refineries in the lower mainland had a major impact in that local region supply.

I’d say all that means there’s a lack of meaningful competition at the refining and wholesaling levels.

These companies don’t want to compete. It’s not a free market.

Most local stations are either selling their gas on consignment, or are told by their head offices what to charge. Either way, few local stations actually can change their own prices.

Shutting 3 refineries in the lower mainland had a major impact

No shit. I grew up in N Burnaby in the 60s. Most of Burnaby North school had parents that worked at a refinery, most of us worked summers there too. Dad was head chemist at Chevron (Parkland now), the others are just tank farms that get fed with refined AB gasoline thru Trans Mountain.

TMX will only ensure Washington State has plenty of supply to sell back to us.

The other BC refinery is in Prince George. Don’t know who owns it now, used to be Husky. Some (Esso) is trucked from AB

No, oil is definitely not free market, it’s the most easily manipulated market there is!

24 hours before the announced 1c rise in the Carbon Tax on gas, they began announcing all over that it was really 2.2c.
Hah! the local Petrocan beat them to it by raising prices a nickel the day before. That was the day after they announced gas prices would come down because of falling oil prices.
Don’t know the prices in Rupert and out west, but around PG they’re hovering at 199.9
For gas refined in PG & Edmonton. Meanwhile, Vancouver with an extra 20c transit tax on their American refined gas is a dime cheaper. We’re paying thirty cents too much.
Now just think: if Horgan cut the gas tax by 13c like Alberta, it would probably only go up another dime!

Don’t know the prices in Rupert and out west, but around PG they’re hovering at 199.9

Gassed up at the Chevron in Rupert yesterday. It’s 200.9 for 87 octane gasoline. Aarrgghh.

When the government announced it was going to drop the gas tax by 13 cents in 2 weeks, every single station in town put up their prices by 10 cents immediately that day.

2 weeks later, when the tax went away, most stations dropped by 9-10 cents initially. Then eventually maybe 11-12 cents. UCP voters aren’t good with math, or with the free market.

like all conservatives or republicans they do not mind free market except when it will make them loose votes then free market bad, high gas or electricity prices bad

Just about shit… cost me $115 to fill up my Wrangler the other day. It will cost more to fill the jerry can for the lawn mower than it did to fill the Saturn when I bought it…
239.9 in Chilliwack, and that’s well outside the 18.5c transit tax area.
It’s the LAST GASP of Big Oil.
As I said before, it won’t be subsidies that make us drive EVs it will be Big Oil gouging. Just saw an article on how even if you pay more initially for an EV you eventually save thousands in fuel costs and that was with gas calculated at 1.40 something. 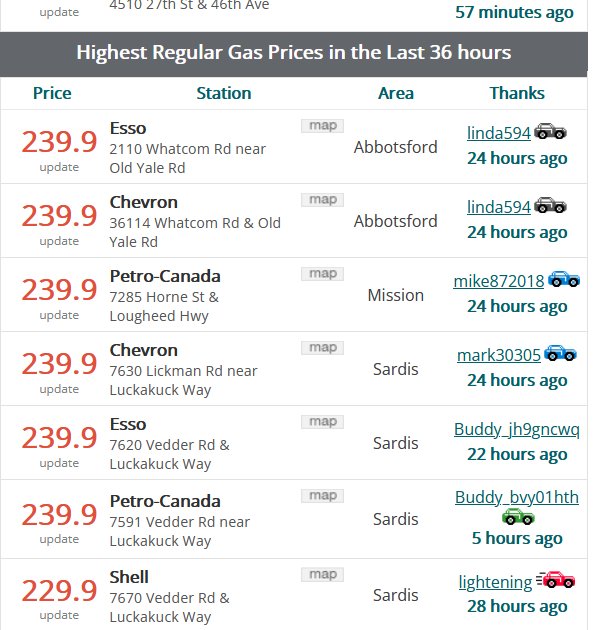 That fill up I bitched about would’ve cost $144 in Abbotsford.

Saw a good one today,.
2/3 of people blame gov’t taxes for high gas prices. The other 1/3 know how economics works. 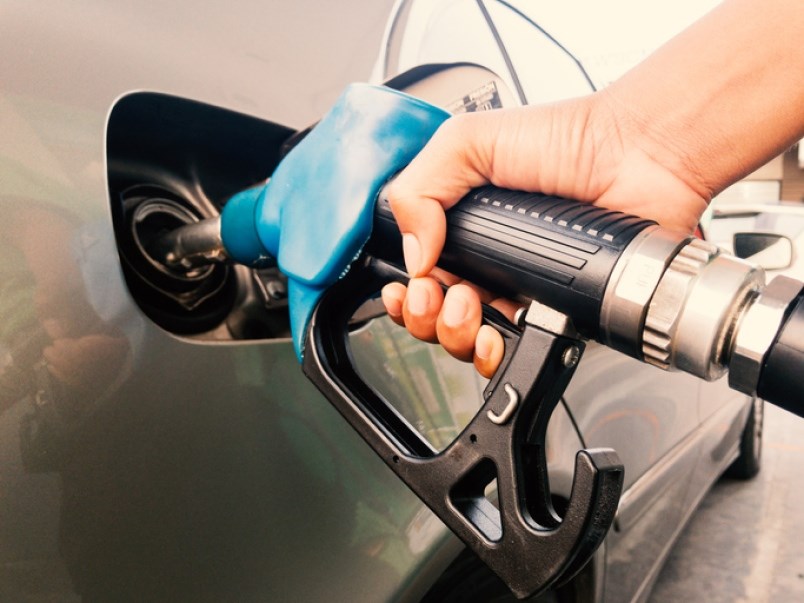 For the first time in decades, Prince George and Prince Rupert are paying higher prices than Vancouver.

It is 204.9/liter for regular gas at the Chevron here in Rupert this AM. Nasty!!

The price here in Rupert is “cheap” compared to other places in BC. I expect the price here is going to go up soon. Terrace has prices as high as $2.16.