Re: Why you should always stomp on a spider!

Actually, as far as larger spiders in Rupert go both the Wolf spider and the Giant House Spider are common. Both however, are visually quite different from the three spiders I mentioned in my previous post (the common house spider, the hobo spider and the brown recluse). As far as the dreaded “brown recluse” goes, they aren’t common this far north. What most people around here assume are “brown recluse” are acutally hobo spiders. Both are visually similar and have a common shape and size, as well as both being fairly venomous (both produce nectroting venom).

As far as your garage goes Delerious, I’m not saying that they aren’t brown recluse spiders, but the presence of a dark, “violin” patch does not make a conclusive identification. There are other genus of spiders that also display a similar marking on their backs. Even the other tell tale sign of a brown recluse spider only having six eyes (rather than the normal eight for spiders) is not definitive proof on its own.

Just judging from map I’ve seen of the recluse range of habitat vs the hobo spider habitat, and given the vast number of sighting of them in my garage… im leaning towards hobo spiders as being the spiders inhabiting my garage.

This picture makes my skin crawl. 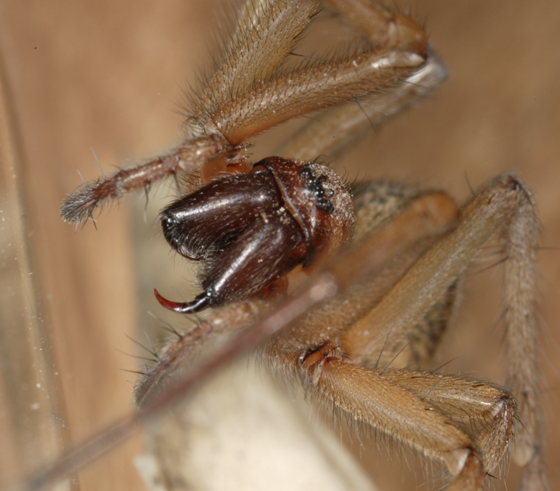 Ok spiders and bugs must be a guy thing… why the heck do you all know so much about these icky creatures?

Ok spiders and bugs must be a guy thing… why the heck do you all know so much about these icky creatures?

I have studied entomology a bit.Â Not sure about the others.

My cat loves cave crickets. I saw him go after one once and he played with it for a while. I came back later and all I found were some legs and antenna. Since then Ive gone into the basement and on occasion have to sweep up the remnents of a cricket.

They are big, black and ugly and have scared the crap outta me a few times too.

Ok for you amateur bug folks I have always had these in my basement/garage. I swear these things must hunt and not have other bugs come to them cause they seem to feed mostly on those grey wood bugs.

Here is one that is feeding right now. What kind of spider is this:

I’m not sure of the exact type but you will always see them in area of low traffic and in places that are usually kept dark.Â Not your regular house dweller unless it is ina dark and seldom used basement space or in a crawlspace.Â I’ll see if I can dig around and find out what it’s called.

Just from the picture… it looks more like a crane fly… but it could be a “real” daddy long legs.

Just from the picture… it looks more like a crane fly… but it could be a “real” daddy long legs.

Definately not a crane fly. I dont know what a ‘real’ daddy long legs is, compared to what I know one to be.

When these guys are stretched out they can be wide. Leg tip to leg tip, Ive seen them about 3 maybe 4 inches, but the bodies are small. The webs they build are just a jumbled bunch of strings. And when one has been sitting in its little web for long enough underneath with be a pile of wood bug carcasses. The webs are not sticky so I cant see how the webs catch anything so thats why I think they must go out hunting or something and drag it back.

Ive tried to find them online before to see what they are but have had no luck so with all this talk of spiders thought someone here might know what it is.

If no stompen on spider, they stomp on you.

I dont think that it is the same spider.Â Daddy long legs are outdoor, garden spiders while the others live in crawlspaces and dark spots.Â Their webs are different that the average spider too.Â They cover a large area and are not flat.Â It would be hard to write SOME PIG in these ones.

Damn, big enough to take down a frog from the looks of things. Where on earth did you see one of those?

One evening on the Charles Hays field.  They are attracted to lights.  I think there was soccer going on.  I guess they came from some water hole in the bush.  About 6 cm in length.