Paid the new credit surcharge yet?

Has anyone paid the new credit card user fees yet? How much ( percentage wise) and were you given the option to pay in any other manner ( cash, debit etc.)?

I haven’t hit any merchants with the fees yet. But I’m holding my breath. I’m sure the gas and oil companies will be the first to jump on that bandwagon. They must be losing so much money on credit card fees, it’s bankrupting them!

Get the New Kapitalist One credit card and get 4% of your fees back.
*instead of purchase (in 2 point type)

Hey Herbie…you’ve always struck me as a guy that ‘s been around a bit…as opposed to young ‘in’s’ like MIG.
Do you remember when credit cards started charging merchants user fees and merchants baked that cost into the price of every thing in the store.
How many merchants do you think will: keep the baked in cost and do nothing; or drop the cost of goods in store the equivalent of the baked in price and just charge the client; or keep the baked in price and charge the client potentially walking away with a larger profit?

So our Alberta gas tax went up 4.5 cents / litre last week. So oil companies raised their prices by 15-20 cents per litre. ‘Cause the average idiot will just blame Trudeau.

At this point they don’t give a shit about competition.

That’s what will happen with credit card fees.

Some companies will put their prices up by 10% and blame the credit card charge. And blame it on Trudeau.

And nobody will do anything, because we worship corporations and don’t want to inconvenience the transfer of wealth to the richest Canadians.

The Mor10 of the Web on TikTok

As a 50-year old, I appreciate being called young.

Hey Herbie…you’ve always struck me as a guy that ‘s been around a bit…as opposed to young ‘in’s’ like MIG.
Do you remember when credit cards started charging merchants user fees and merchants baked that cost into the price of every thing in the store.
How many merchants do you think will: keep the baked in cost and do nothing; or drop the cost of goods in store the equivalent of the baked in price and just charge the client; or keep the baked in price and charge the client potentially walking away with a larger profit?

Yes, I remember well. When I built it into the prices in my computer store. Sometimes $70.00 in card charges on the sale of a system. Plus a buck and a half for a Moneris transaction fee to use the terminal. RBC even wanted a 2.75% fee for ‘handling cash’ FFS.
Those fees have been calculated into the price for decades. This is just a total ripoff.

Used to piss me off when I negotiated a lower cash price then the customer whipped out his Visa… and went full Karen that I was a rip artist and lying that Visa charged me because he knew they charged him fees…
they got you coming and going and the OWN the gov’t too.

I remember almost 30 years ago, using the “I’d like to pay with American Express” gambit when buying an Atari STe. I knew that American Express (and Diner’s Club?) were brutal on the fees they charged merchants.

The salesperson was like “um. I’ll give you a discount if you pay in cash or use another card.”

I don’t mind paying the fee, but reduce the price overall. The little guy might, but the big corporations certainly won’t.

The irony of all of this is that small business banded together and launched a class action suit against big business and eventually won. They won around 181 million from big business as well as the right to charge the consumer service charges.
In other words they used a socialist tactic to shaft the consumer. What you say? Well it has been for many years a tactic for the disenfranchised to band together to legally protest unfair treatment, social policies, or perceived abuses. (All of which businesses in general have traditionally seen as a socialist, leftist or communist and definitely destructive to societal well-being).
So now that the nasty in-fighting (small vs big business) has settled who is going end up paying? Us the consumer.
So business fights business and who’s going to be left bruised and even broker? Consumers!

Hi Young-Un
You mentioned Diner’s Club a memory of a family outing to the Drive In many years ago and Danny Kaye being pummelled by cards from huge contraption referred to as “the Brain”…an early 60"s depiction of a computer. 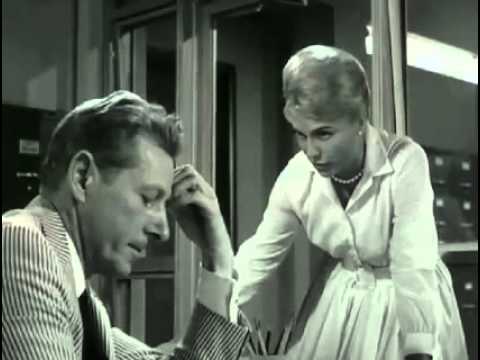 Turns out Diner’s Club was the first credit card.
Later in life, but not much later I was taken to the basement of a building at the UofT to see ‘a computer’ in an access limited, air conditioned, lab…it has just been installed.
I was told when I grew up I would have one like that in my basement at home. Being a bit short of a full deck I spent my time imaging the size of the house I would have to fit a computer size in…with air condoning too!
Messed up my mind forever around computers…why doesn’t every iPhone at least come with air conditioning?

Had a buddy that worked for NCR in the early 1970s. He’d dress in a suit, stuff his hair under a short hair wig and cruise about gathering the early charge papers from Eatons, Woodwards, etc.
Drop them up and pick up boxes of punch cards they’d made from the previous night, bring them to the data center.
Then he’s come home real late, tear off the suit and wig and fire up the bong (called a Derder back then) join us for cards…
BTW: I don’t think business vs business can be considered socialism. That’s come to mean when business can’t deliver, the gov’t steps in like Hydro, BC Ferries, BC Rail. Distinguish that from the American brainwash that socialism = communism where gov’t IS the only business owner.
When I ran the local ISP we HAD to lobby against the big guys. Not to rip off customers, because the Telcos were offering free computers, and retail sale prices that were below wholesale prices they charged us. To drive out competition - which they did!