what is wrong with these ppl you should be co-operating with our neighbours instead of fighting with them, 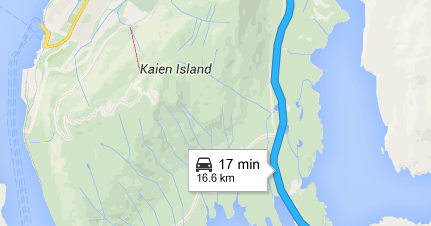 But 17 kilometres apart by highway, Port Edward and Prince Rupert seem somewhat more distant on a number of festering issues of late Wor...


thanks to the North Coast review for this

He’s going to build a wall, and make them pay for it

But seriously, what did the mayor say that was inaccurate?

I think the Mayor and the council members that have spoken out are pretty damn accurate in what they have said. Port Ed has had a sweet deal for too long.

I think the Mayor and the council members that have spoken out are pretty damn accurate in what they have said. Port Ed has had a sweet deal for too long.

I agree completely! If Port Ed wants to use Prince Rupert services they can pay their fair share.

How do you co-operate with a mayor and counsel that just holds up a hand and say “no”? I would flip your comments around and suggest that it’s Port Ed that’s not co-operating with their neighbors. Prince Rupert co-operates by providing a lot of services that the people of Port Ed don’t pay for at the same rate Prince Rupert residents pay. What is it that Port Ed does to “co-operate” other than say “no”?

Not that I blame Port Ed counsel, or our counsel, for this mess. I blame the morons who first put this deal together. Who in the hell signs on to a contract with no end clause or mandatory review? That just blows my mind.

the deal for Ridley Island taxes that are shared 80 - 20 is because Rupert got watson island when you have to go through Port Edward to get to it, it should have been in Port Edward’s tax base, so when the feds wanted to put Ridley Island onto the city’s tax base they said since Watson Island was put in Rupert’s tax base they would give Port Edward 20% of taxes collected to them to make up for Watson Island, Maybe the Mayor and council should look up that history before claiming they are getting screwed with the tax deal

I’m guessing that you live in Port Ed and you don’t want to be hit with the taxes that I pay here in Prince Rupert. I am hopeful that the Mayor continues to fight for me.

and you would be wrong I lived all my life in Rupert, and if you are worried about taxes don’t you wonder why our mayor and councilors are not using the Legacy Corp money to lower them?

The city did use the Legacy Corp’s money to fund projects so we don’t have to face rate increases.

I’m pretty sure using the money for the sole purpose of lowering taxes would be highly irresponsible.

and you would be wrong I lived all my life in Rupert, and if you are worried about taxes don’t you wonder why our mayor and councilors are not using the Legacy Corp money to lower them?

You live here in PR and you want to pay very high taxes? Also, you don’t want the Mayor to fight to have our taxes lowered by having Port Ed pay their fair share? I would rather pay lower taxes by having Port Ed chip in and help.

didnt say i want our taxes to be higher, i’m saying our mayor is picking a dumb fight that is not a winner. lets take the legacy corp, they lease watson island for below market rates only to turn around and re-lease it to pembina for market rates, but our mayor and council will not tell us why, or how much the city gets out of it or how much legacy corp gets out of it, shouldn’t that market rate lease go directly into general revenue? that would help lower taxes, then look at city hall, why is our city admin making more then 200 grand a year? why so many ppl working for the city is making over 100 grand a year? as for Port Ed, if i’m right they do give the city money in an agreement for usage of schools just like LaxKwalaams does, and as the article on north coast review says when Port Ed citizens use the pool or rec center they pay the fees just like everyone else

didnt say i want our taxes to be higher, i’m saying our mayor is picking a dumb fight that is not a winner.

I like his chances in this fight. Please edit your posts for capitals, spelling, and punctuation. Thank you.

The mayor may not win the issue of the Ridley Tax agreement. I’m no expert, so it’s hard to say if that contract can be changed. However, sometimes there’s more than one way to skin a cat. It seems to me that from his statements that he intends to put pressure on Port Ed when it comes to accessing Prince Rupert and all that we provide. Again, I’m not an expert so it will be interesting to see how this plays out. Frankly, I think it’s good that the mayor is looking at every option he has to bring in more revenue to this cash strapped town. Anything we can do to stop going to the tax payers should be on the table.

Jabber63 has valid points. His first post (?) sums this issue up. Neighbors gotta sort this out. Especially Northern ones. The last thing we need is division. This can be sorted out in a primal way. Port Ed and Prince Rupert need to arrive at a number that every one can live with. Maybe not 700,000.00/ year , but a number. A number based on a per capita ( population)
And the “Facebook posts” gotta stop.
Contrary to popular belief it’s not a credible way for our politicians to get there message across.
Don’t make our citizens create a Facebook account in order to here his rational.
Use the city website. Create a " message from the mayor" page.

Neighbors gotta sort this out

I agree. A wall is not the solution. Physical or otherwise.