01/01/14: RCMP in Prince Rupert BC are asking for help to locate 26-year-old Adam Moore who was last seen on the evening of December 28th, 2013. RCMP advised that Adam had been suffering from possible symptoms of depression.

Further Police investigation determined that Adam had been spotted in the area of the local 7-11 in Prince Rupert at approximately 3:15 a.m on December 29th, 2013. Additional inquiries determined that Adam may have driven to Terrace, BC; however police have not been able to corroborate this information as the details have been vague.

At this stage of the investigation police are making every possible effort to locate Adam, stated Cst. Matt Ericson, spokesman for the Prince Rupert RCMP. Adam’s family and friends are very concerned of his whereabouts, and we are making an appeal to Prince Rupert and the surrounding communities for any information that may assist us in locating Adam.

Please post MiG’s link in all of your social media applications, folks. I hope they locate this young man soon.

I don’t understand why no one has heard, or knows anything. I echoed this in a post I made on Facebook earlier. This is Prince Rumours people! Someone has to know something! Any lead is a good lead, small, or big! Someone has to know something! Please, if you have ANYTHING, leading to the wherabouts of Adam, call Crime Stoppers at 1-800-222-TIPS (8477).

My thoughts are with his family.

“RCMP in Prince Rupert BC are asking for help to locate 26-year-old Adam Moore who was last seen on the evening of December 28th, 2013.”

The full story is on facebook, located at this link:

Moderators: As this matter is not just focused on Prince Rupert, I am posting this in the “General Chat” forum, in hopes of reaching a broader platform. Thank you.

Bumping this topic. I hope Adam is located.

A plea from his mother:

UPDATE: Saturday, January 4th at 11:00 am.
A tip came in that Adam was seen in Fernie, BC - The Prince Rupert RCMP are in communication with the Fernie RCMP and at this moment they are reviewing the surveillance video at the business he was spotted. Once they have reviewed the video the PR RCMP will be informed and the information will be conveyed to the family. Stay tuned on this.
The Prince Rupert and Terrace Search and Rescue teams are back out today scanning the sites. As well, the PR RCMP plane is panning the areas.
There are many volunteers asking how they can help, if you are one of those who are available to help here is the answer you are looking for - “Keep an eye out for a 2005 Black Jetta, 4 dr. with the license plate # 517 - N V V.”
If you have any further tips please contact the PR RCMP at 250-624-2136 and ask for Cpl. Heather Larsen.
Thank you and stay tuned.
Maynard for the Family. 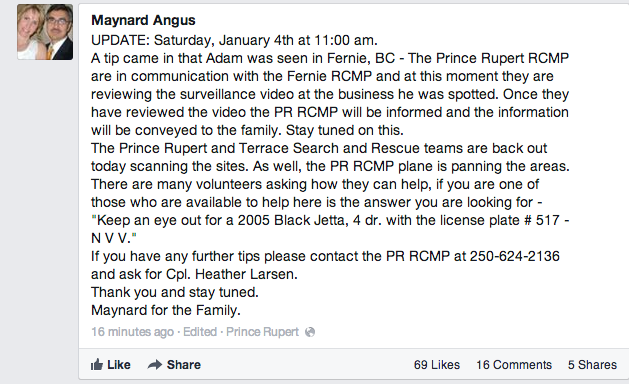 Facebook group reporting that police have found what may be his car near Port Edward.

Northern View reporting that police have called off a massive search and cordoned off an area near the Galloway Rapids Bridge.

Facebook post says bumper and license plate found, but no other confirmation. I guess we wait for the RCMP to put out an official confirmation.

An extensive search was launched in the areas between Prince Rupert and Terrace, BC.

On January 5th, 2014 in the early afternoon members of the Terrace Search and Rescue located parts of a vehicle in the area of the Galloway Rapids Bridge just East of Port Edward, BC.

At this time we are able to confirm that the vehicle parts that were located belonged to the vehicle owned by Adam Moore, stated Cst. Matt Ericson spokesman for the Prince Rupert RCMP. Due to lack of daylight and the safety of search teams becoming a concern the search has been temporally suspended overnight, and will resume at daybreak.

A dive team has been contacted and will attend the scene at first light along with members of search and rescue and RCMP West Coast Marine Services.

My thoughts and prayers go out to Adam , and his family .

I hold on to the belief that Adam will be found alive.

Don’t give up people.

Pulling out the car now.