Happy Groundhog Day. Phil says 6 more weeks of winter, but with global warming he might be wrong. 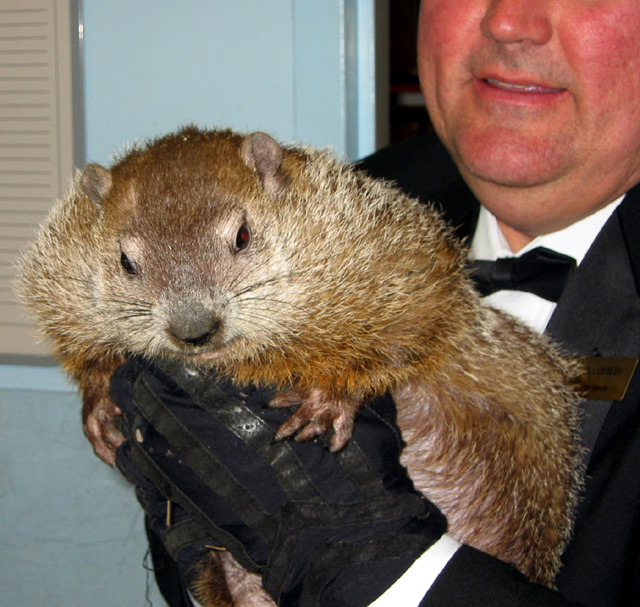 Seems like us Canadians are benefitting from Global warming more than the Yanks.

The pudgy white woodchuck failed to see his shadow on Groundhog Day in the central Ontario town.

But a unanimous groundhog verdict was prevented when Punxsutawney Phil in Pennsylvania saw his shadow.

Folklore has it that if a groundhog sees his shadow on Groundhog Day, he’ll flee to his burrow, heralding six more weeks of winter.

If he doesn’t, it means an early spring.

The origins of the tradition aren’t clear, but it’s likely related to the fact that Groundhog Day falls midway between the start of winter and the beginning of spring.

Some say it started with Candlemas, a Christian custom named for the lighting candles during the Feast of the Purification of the Virgin Mary. According to an old Scottish couplet: “If Candlemas Day is bright and clear, there’ll be two winters in the year.”

In Europe, the custom was to watch for hedgehogs emerging to catch insects. But when Europeans settled in North America, the lack of hedgehogs forced them to find a substitute.

In 1887, German settlers in Punxsutawney, Penn., headed to Gobbler’s Knob on Feb. 2 for their first, official Groundhog Day at that site.

Dozens of communities across North America have since come up with their own weather-predicting critters.

It should come as small surprise that the prognosticating woodchucks didn’t arrive at the same prediction – they rarely do.

While most of Canada basks in unseasonably warmth, a blast of frigid weather has been ravaging Atlantic Canada.

The region was forced to battle rising sea levels, heavy snowfalls, and howling winds just days after reports of balmy temperatures forcing thousands of pregnant grey seals ashore on islands in the Gulf of St. Lawrence.

Normally, the seals would give birth on ice floes, but there’s been a shortage of ice in the Gulf this year, forcing the seals to take to the islands.

Environment Canada has noted several weather anomalies across the country, with ice roads not forming in northern Saskatchewan, Winnipeg getting rain in January, ski hills being idled by a lack of snow and more rain than usual drenching Vancouver. [/quote]