What did You Do This Summer?

Remember when we went back to school and we had to write those horrid compositions on our summer vacations?  Well, us Baby Boomers did anyway !! Thought I’d go back in time and see what you all did… Share with us guys !  I mostly worked and enjoyed coffee time and walks with my fella…Your turns…

We took our big holiday in the spring (trip to Hawaii) so mostly we just worked, hung out in the sunshine and took the dogs out for lots of walks. Saw the big travelling ancient history exhibit at the museum in Victoria (awesome) and did some day trips around the south island. Didn’t get out on the water though because of our schedules, which sucked but then some days it was too damn hot to think of paddling out there-we would have fried!!!

Well I played on the beach an threw rocks at my gal whil she drank coffee cause she is not suppose to drink coffee is bad for her so she drinks hot chocolat stuff.

well my summer was busy starting with vol for Canada Day, then a birthday, then my new in-laws came to visit for our wedding day then went for a trip back home to HB for a week, then came back for 4 more birthdays then my mom left for Vic. also we went for hikes, walks, bike rides, went to Terrace a few times went on picnics with the family and very close friends of ours we had a blast was a very memoriable summer !!!

I worked…and I worked some more days…and a whole bunch more…ugh.
It was a good summer here though, the weather seemed alot better than other years.
I like to take my breaks around spring and early fall. Everyone else is home from there vacationing, and its quieter on the roads and shopping is a plus, cause its all on sale…

.So while I’m on vacation, you guys are all at work  lol…works out good.

[quote=“codybear933”]
Remember when we went back to school and we had to write those horrid compositions on our summer vacations?  [/quote]

I spent the better portion of this summer writing a business proposal, researching store fronts, and being utterly annoyed at the speed in which Rupert operates.  But I love it here so I’ll get over it

My summer begins in the fall with a trip to France/Belguim/Netherlands with my other half, during which time grandma is taking my kidlets to disneyland.  I worked for three weeks or so at the cannery(easy vacation money) so I missed those 3 weeks of sunshine…I do wish I got to go camping this summer…it seems I missed that

I went to Vegas, got married, went around Washington and Vancouver Island on my honeymoon, came back to Rupert  painted and redecorated the inside of the house, OCD’d on True Blood and the Twilight books and now I am gutting out the basement! It has been a productive summer for me.

I worked far more often than I should have, played some slo-pitch, and chilled in Smithers for a few weekends.  I enjoyed it.

I went back to Rupert with my fiancee and her parents and introduced them to my parents.  They all got along famously.  Then we (my fiancee and her folks) flew back to Vancouver and drove to Penticton to meet my grandmother and my aunt.  Drove back, went to Victoria to visit more family, then over to Galiano Island for our wedding.  After that, we took the ferry back to Victoria where we all had the wonderful pleasure of meeting one of the finest contrabass players who has ever held a bow.

After coming back, I got my motorcycle repaired and spent half of my remaining summer riding it all over the place, and the other half studying for the top level Japanese proficiency test.  My only regrets are not making it to the beach or the dojo at all, but other than that it was a pretty damn good summer.

I had a great summer.  I took care of my two children, read some books, went for long walks, and played with my various gadgets.  Life is good.
I’m heading back to work on Tuesday.  I’m still working on my 6/49 retirement plan…

Exactly what I wanted to do…

Now the grind is on…

That’s even more depressing than this comic strip 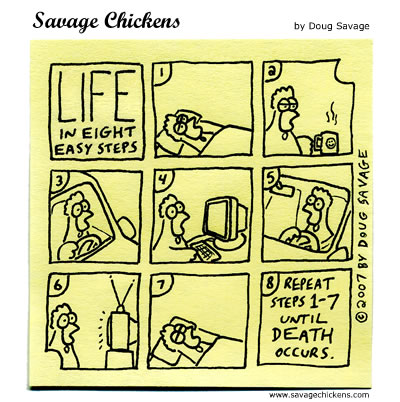 Wrote about murder, took multiple baths, played street hockey against the Rupert Rampage and got,well, rampaged, met many cool people, talked a lot with Robbie Jongeward, smoked cigarettes, met my future wife, dumped my future wife, kept BC Strong, read THE DEATH AND LIFE OF GREAT AMERICAN CITIES by Jane Jacobs, drove to Terrace twice, sped away from Terrace twice, took my Dad to the Belmont, woke up in my own mess, left that mess until August, and then typed all of it up for you fellow HTMFers to read verrrrrrrrrrrrrrrrrrry sloooooooooowly.

BTW: Awesome thread – we need more of these.

You do not have to answer that Bro.