Weird object out the highway

Driving back from Terrace this afternoon, and noticed a green cylindrical metal shaped thingy on the pulloff just before you hit the Summit. I drove as a passenger 1 x last week, and drove myself 2x to Terrace as well and I never saw it before. Sorry but I was driving so no pic.

Their here,they have finally landed after all those years of flying around Rupert and the surrounding area.

Their here,they have finally landed after all those years of flying around Rupert and the surrounding area.

You walk about town Justin Case…They’ve been here all along, that is just their Mother Ship, hopefully preparing to take them home… 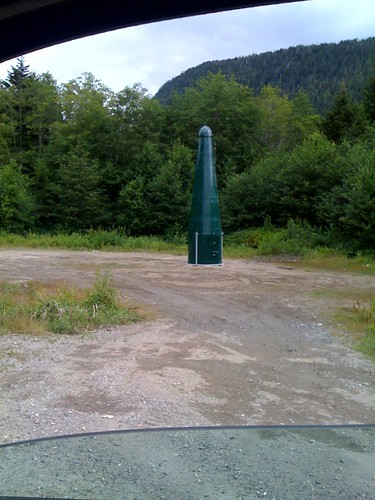 I have a photo with a real camera, but can’t upload until I get home. This one is from my phone.

I have see that before in terrace at that big BC hydro lot on the right hand side of the highway just before you enter terrace, just before crappy tire

Might be this little guys ship.  I ran into him last night outside 7-11 and he was a bit angry because of the gas prices.

It may be one of those mobile Russian thermonuclear launch vehicles.  Probably nothing to worry about.

It may be one of those mobile Russian thermonuclear launch vehicles.  Probably nothing to worry about.

There used to be several up on Mt Hays. Fisheries use them to cover antennas and radar stuff.

It is a phallic symbol, for sure…Wonder what that means ?

It’s a repeater housing for radio equipment. Batteries go in the bottom, radio gear in the middle, antenna in the top part.
Anyone out there really need twenny bucks? Bring it to the Fort, I’ll give ya (scratch, scratch, twist hoodie) twenny bucks…

The Jolly Green Giant and his wife were on that last kinky cruise ship.
It must be her’s!

Had to break out my tinfoil hat to keep out its mind probing rays.

WOW that is odd hahahahah

Must take a lot of batteries to make it work!

Can anyone tell me an estimated height?

Can anyone tell me an estimated height?

Didn’t think to put a person next to it for scale, but there’s a similar one here:

that I’d say it’s about 8 metres high, unless the guy hugging it is really short or really tall.