Stop The Meter On Your Internet Use

UPDATE: The Government has reacted, after more than half a million Canadians signed the petition against UBB. The CRTC and the Government have asked the big ISPs to reconsider their UBB plans.

Meanwhile, Citywest has ignored the CRTC and the national petition, and is still planning on introducing a metered internet in the near future.

Let’s show them that Northwest BC, like the rest of Canada, doesn’t want a metered internet.

This means we’re looking at a future where ISPs will charge per byte, the way they do with smart phones. If we allow this to happen Canadians will have no choice but to pay more for less Internet.

Big Telecom companies are obviously trying to gouge consumers, control the Internet market, and ensure that consumers continue to subscribe to their television services.

This will crush innovative services, Canada’s digital competitiveness, and your wallet.

We need to stand up for the Internet.

This decision is a blow to consumer choice, to access, and to free expression. Independent Internet service providers (ISPs), such as TekSavvy, pay incumbent telecoms like Bell for access points in their networks. In applying usage-based billing (UBB) to these indie ISPs, the CRTC has allowed Bell to determine and limit how many gigabytes of usage their independent competitors can provide to their customers.

This severely limits competition in the telecommunications market, which is bad for innovation and diversity of content.

This also means that the cost will necessarily be passed down to you, the consumer.

Usage-based billing, or metering discriminates against certain forms of information insofar as it charges consumers more for content that requires the use of a large amount of gigabytes, such as audio and video.

This also means that those who produce media-based art, and depend on the Internet to show the world their work, are less able to produce and disseminate their content freely. This means less innovation and more control of art, film, music, and other forms we may not yet know of!

Sign the petition and save the freest medium we have ever known (again!). Stop the meter and save our net!

Read TV Versus The Internet by Steve Anderson: thetyee.ca/Mediacheck/2010/10/06 … sInternet/

Thanks, MiG. Signed the petition.

I saw this coming unfortunately. The Big Three cable/satellite companies, Shaw, Bell, and Rogers are also in the Internet business. With services like Netflix Canada, 8 bucks a month for unlimited access to movies and television shows/seasons commercial free, this seriously cuts into the Big Three’s (excessive) bottom line as media providers. Instead of finding ways to compete they lobby the CRTC to restrict. This CRTC decision certainly stifles innovation. I can see many people canceling all or part their cable/satellite subscriptions in favour of Internet based media broadcasts over this move. I know If my internet bill goes up, my cable bill will go down.

Hmmm must be an election getting close!

This sums up my thoughts on the UBB quite well: 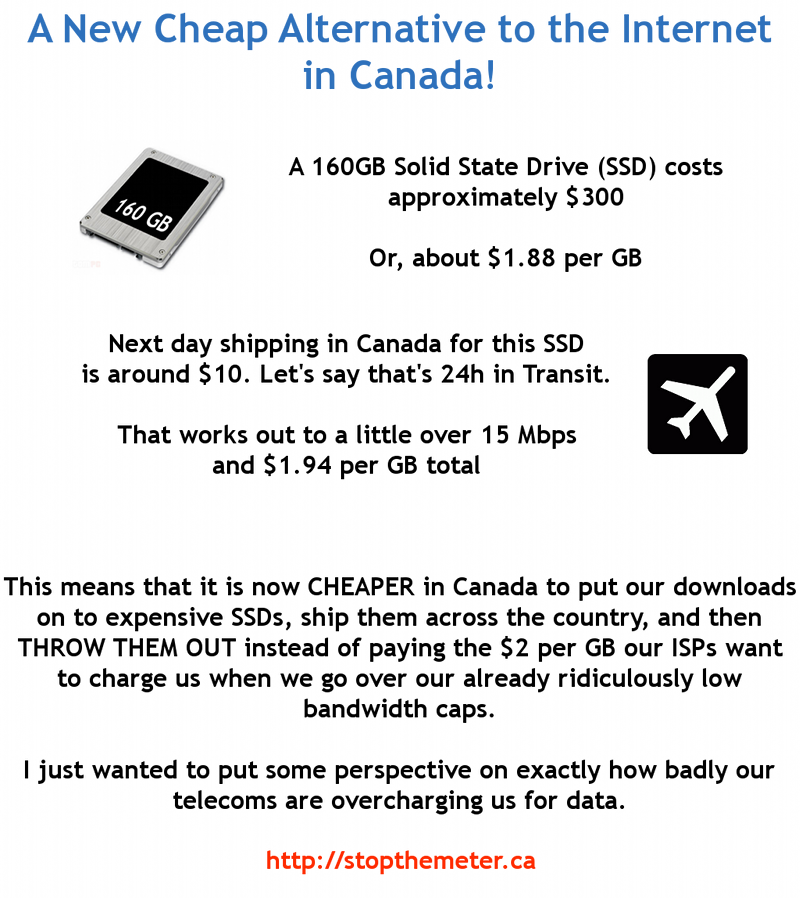 That is a seriously awesome comparison.

Rad comparison. I am now paying higher rates and using my cell phone as my primary internet connection. Why? because even though mobile data plans are ridiculously over priced at least I get the convenience of mobility. Also having my cell phone act as a roaming wifi hotspot is awesome to me.

Also my mobile connection is 100x more reliable than what citywest ever provided.

Clement said he’s “very concerned” about the Canadian Radio-television and Telecommunications Commission’s Jan. 25 ruling. A lobby group for small businesses urged him to overturn the decision, which it said would increase costs and harm their ability to compete.

The CRTC’s ruling would allow phone company BCE Inc. (BCE) and major cable firms to charge smaller third-party carriers that lease their network usage-based billing rates at a 15% discount to what they charge retail customers.

The CRTC’s decision, which is effective March 1, means that the smaller providers would pass on the costs to customers.

Clement said the CRTC’s ruling will have “pretty severe impacts” on consumers and small businesses. [/quote]

stopthemeter.ca has reported that they have received over 110,000 signatures!

“The Harper government will overturn the CRTC’s decision that effectively ends “unlimited use” Internet plans if the regulator doesn’t rescind the decision itself.”

The big question, of course, is what will Citywest do? Weren’t they supposed to have this in place by now for us? Maybe we can see which of the Prince Rupert online newspapers will be the first to ask Citywest really tough questions on this matter, rather than just printing their press releases. My bet is it won’t be the online newspaper sponsored by Citywest.

We should send Citywest a memo… We need our internetz back

The CRTC took the slap in the face and are reconsidering their ruling now.
Not that it means if you had a cap before it’s going to go away.

Citywest always had the cap, they just never inforced it. I don’t mind them enforcing there own limits to keep track of costs. Think they’ve been pretty good to us so far, my brother was getting warning letters from shaw years ago and had to stop downloading $h!t.
I don’t like the fact that they are regulated to charge because big business doesn’t like competition.
I am hoping they won’t charge more though. Pretty easy to go over 75 gig with Netflix and bit torrent, even though I don’t consider myself an excessive user.

Citywest does not want you to watch TV and Movies off the internet,Plain and simple, netflix, google tv, soon, boxee box, Apple are all compition with them, they want you to use there cable service to do that, look how much a person could save by simply getting rid of cable. Plus citywest is a monopoly, you can not switch to rogers, bell for your internet, we should have choices, and if you watch 10 HD movies a month you just burned through your limit, does that seem excess to you? its a butch a bullshit to get the user to pay more…

Citywest always had the cap, they just never inforced it.

They’ve never charged before. The letter they sent out said there were “revisions” to their policies, and they were providing notice of those revisions. So this is something new.

I am hoping they won’t charge more though. Pretty easy to go over 75 gig with Netflix and bit torrent, even though I don’t consider myself an excessive user.

Meanwhile, where is the portal they said would be ready by now?

this just in from the globe and mail

Why hasn’t one of our local reporters poped in for a chat with Rob Brown to see what’s going on with all of this.

I’m pretty sure that my internet service has been for 75 gigs since I got it installed. I think the “revision in their policy” is to start implementing their cap.

Why hasn’t one of our local reporters poped in for a chat with Rob Brown to see what’s going on with all of this.

I doubt any publication sponsored by Citywest will ask any hard questions. They’re probably just waiting for Citywest to e-mail them a press release so they can copy and paste it.

Back to the drawing board…March 1 is the reversal deadline.