I dunno why I never did this before…

First screen of iPhone (when you turn it on or wake it from sleep): 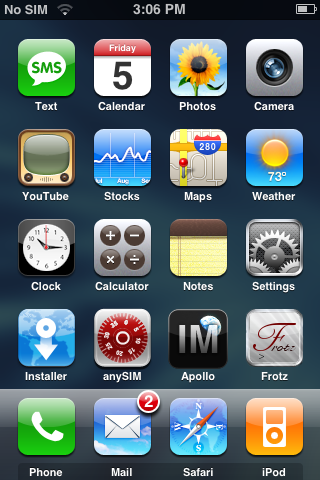 Launcher scrolled down to show other apps:

Screenshot of unlocker program that allows any SIM to be used: 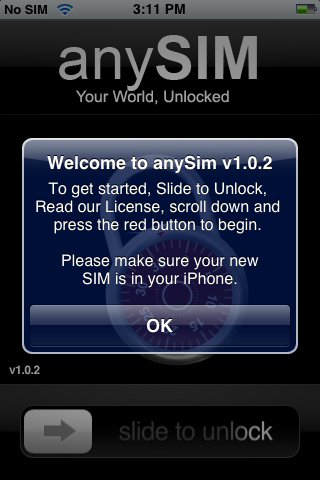 Playing Zork on the iPhone: 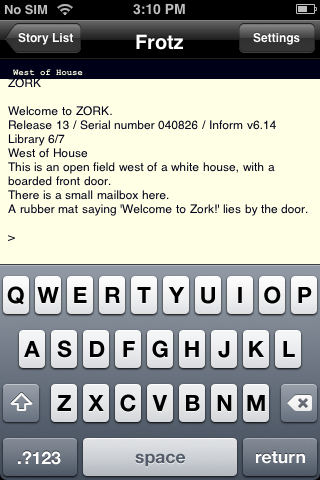 zooming in with multi-touch, then rotating, etc

I use the iPhone for all kinds of video and audio podcasts:

I never have to go outside to see if it’s raining:

Apple stock is up again, probably because fools like me buy their stuff:

It’s actually not bad, 'cause it’s all h.264 encoded stuff, not chunky video
like on a web browser.

The phone part of the iPhone.  This one usually has a Fido pay-as-you-go SIM
in it, but it doesn’t work in Rupert (yet).  I took the SIM out so that it
would stop searching for the network (and use up my batteries).

Forgot to take a screenshot of google maps / satellite images… will take one next time I ssh into the phone.

Looks good, we have the new itouch ipods ar work, i am not a fan of it yet, pretty hard to get a unlocked iphone for now too.

Well, someone I know just got the iPod touch… will have to get some screenshots from him.

As for unlocking new iPhones – just downgrade the firmware.  As of last night the iPhone dev guys have been able to get into the new firmware anyway, so there’s bound to be a new unlock soon.

Well, someone I know just got the iPod touch… will have to get some screenshots from him.

As for unlocking new iPhones – just downgrade the firmware.  As of last night the iPhone dev guys have been able to get into the new firmware anyway, so there’s bound to be a new unlock soon.

Would be nice to see apple get back into the PDA market.  Something like an iphone but without the phone.

The new iPod Touch is basically that… does wifi and stuff too.  Like I said, a member of HTMF just bought one… I wonder if he’ll post some photos or videos of it?

The multi-touch interface is pretty slick.  It would be really neat on a subnotebook or small tablet.  Maybe something about the size of a CD jewel case or something like that.

Apple invented the PDA a long time ago, but it was too big and bulky.  The guys who worked on the project left and founded Palm (and then left there and founded Handspring).

The Newton and early Pilots (even before they were called PalmPilots and then just Palms) were pretty nifty.  I still have an original 128k pilot somewhere.

Edit:  I knew I saw that rumour somewhere:

The problem with tablet computers is that after 4 or 5 attempts to create a market, they still haven’t taken off.   I wonder if a little mini-tablet with a nice multi-touch interface would take off?

The new iPod Touch is basically that… does wifi and stuff too.  Like I said, a member of HTMF just bought one… I wonder if he’ll post some photos or videos of it?

I like it, its also fast with surfing, im not sure how i like how thin it is, i can see how these will break easy in some ones pocket. Ekk’s.

Is it much thinner than iPhone?  My iPhone’s always just in my pocket, without a case.  Doesn’t get scratched or anything like that…

I was going to buy a case, but the guy at the apple store pulled his out of his pocket, then pulled out keys and stuff, and told me it was a waste of money.

Looks like the iPod touch is pretty tough too:

Good tests However i would never want to do that

Mig, what kinda things Don’t you like about the apple Iphone ?What could be improved and or changed ?

A GPS would be nice, especially considering the google maps / google earth app is awesome.

A GPS would be nice, especially considering the google maps / google earth app is awesome.

My new Blackberry Curve has that, however i hardly use it because the screen is so small and the maps are hard to read, however i do have a mac gps now and use a laptop for work now.

I just bought a Ipod touch, going to check it out tonight, Im going to give the g/f my old  Ipac. the Ipod touch looks funky. too bad its only 8 gigs.

were can i download extra stuff for my ipod touch? is there legit software for it?

What do ya got there the 8 gig

here is my 16 gig ipod touch that i have had for a week today.
i see it as where computers are going
the multi touch interface is so easy to use and powerful
plus i was at pizza hut today and i was able to pull it out of my pocket and log into gmail
then cinipiex and check out what movies were here

i cant wait to see what apple will put multitouch on

I thought I read somewhere yesterday that there is now a jailbreak version for the iIPod touch that allows you to install many of the same 3rd party apps that people are putting on the iPhone. You might want to look into that Astro.

yes mike i just read that too, I noticed there is no sound without headphones that sort of sucks…