By pledging to lift moratorium on tanker traffic on BC’s North Coast?
And fast tracking pipelines?

Unfortunately, I see a possible minority government. Advocates of this type of federal governing say it forces 2 parties to sit and hammer out legislation at the same time building relations and finding common ground with partisan parties.
I can only speak to the minority government at the provincial level. In BC it seems that the NDP are at the helm with the Greens being towed behind in a life raft.

I agree. I think things have shifted after the latest Liberal scandal. I think there’s a strong likelihood of a minority government.

Can anyone believe the polls? Not once has my cell rang with one, the landline only rings with them. How many NOT old farts even have a landline these days? How does that reflect they’re at all accurate? 5% of people with landlines are going to vote Green?
Half a million marched in Montreal.
And I read mock mock marchers were paid Thunberg victim of parental abuse, nazi poster child etc.
I hope the young crowd shows up and kicks these complacent bastards in the nuts like we did the “silent majority” when we were young… 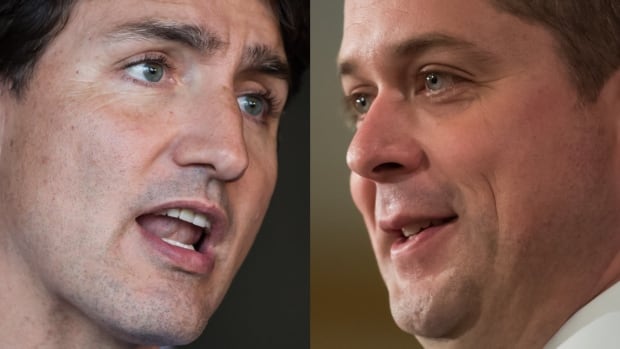 It's rare for federal elections to be as close as this one appears to be, but past examples show us what we can — and can't — expect this time.

I am disgusted that the man hoping to be elected to run one of the richest countries in the world is proposing to cut foreign aid by 25%. Shame! Shame!
And further disgusted by this:

Conservative Leader Andrew Scheer plans to remove roadblocks for large projects that would get natural resources to deep water ports, but also Quebec electricity to Ontario.

I voted on Friday; I certainly did not vote for Harper-lite. I don’t like Justin, but, I would rather have him as our PM than Scheer.

“I have to scratch my head and say why is there such enormous animosity toward the federal Liberal government that bought the pipeline for the express purpose of getting it built?”

Premier John Horgan about the Trans Mountain pipeline expansion, but is puzzled by increasingly vocal separatist sentiment from some Western provinces.

Some would argue purchasing the pipeline was for reasons other than pushing it through, or a desperate last resort to save a project that was so badly handled by governments.

I personally feel they’ll follow through with attempting to expand and create temporary jobs, consulting more thoroughly with indigenous groups and possibly even selling it to them to manage.

The TMPL is a very very small amount of the hate I see streaming on FB. Outside of the oilfield argument completely, the Liberals are pushing through more firearms restrictions to licensed and registered owners and bans that will affect what they already own, which is a very unpopular and in my opinion completely unnecessary move in Canada. On the economic side of that, there may be a multi-million or billion dollar plan to buy-back firearms from owners if they handled it properly, and the resulting sales and taxes on firearms may be a lot more than you could imagine. I’m barely in the hobby and still well into the 5 figure territory. Some colleagues spend a minimum of $1000 per month of ammunition, etc. It’s a large and misunderstood niche, that doesn’t need further regulation, IMO.

For the oilfield, you’ve got a government that has been allowing foreign propaganda and miss-information to be spread throughout the country without any push-back, clarification or support, which has contributed to a growing mindset that Canadian oil and gas is dirty, unethical, dangerous and unnecessary. Pipeline propositions to the East to attempt to keep Canadian oil inside of Canada to be refined and distributed instead of importing, seem to be out of the question and there is a never ending increase in opposition both from Canadians and political parties when it comes to anything oil-sands related. It appears the NDP would like to see it dismantled as soon as reasonably possible.

During all of that, Richmond sees a new pipeline to move Canadian oil refined in Washington state to supply YVR from a new Fraser River shipping terminal that receives coastal deliveries from Washington refineries, without a scandal, protests or media coverage. Why is that one OK but the TMPL expansion to provide CANADIAN refined product from Edmonton to the same market is blockaded? The US has a very smart and very effective means of manipulating and funding anti-canadian-oil-and-gas disruptions throughout Canada, while projects that will interest their economy are left to be.

To me it’s very confusing that a fairly wealthy nation with such a large reserve of oil and gas, stringent environmental standards and a proven ability to operate at 1/2 the value a barrel of oil vs our neighbors to the south is unable to supply even itself with fuel. It is true that WTI or Saudi oil is very different than what comes out of the oil-sands, but there isn’t any reason we’re incapable of using it, or exporting it for trade on refined products, or revenue to invest in alternative energy projects.

On to the equalization and representation stuff, I don’t fully understand their arguments on this. Equalization can come from any province, but the aches and pains in Alberta’s opinion might be that the East requires more support than the West, and having different political and economic mindsets on either end is dividing the country right at the Ontario border. Albertan’s seem to feel they should have more representation, as do most provinces, but seeing this last election with more overall votes won by the Conservatives the West seems to be especially upset about it. A call for electoral reform or separation is now the popular cry, but I’d rather just see the Liberals do what’s in the interest of all of Canada, which certainly includes supporting Canadian oil and gas and using their ‘carbon’ taxes to fund incentives and projects related to alternatives.

I’m certainly not against alternatives. I fully intend to buy an electric car within the net year or two, however living in a downtown neighborhood without a driveway will be a challenge for charging. If someday solar proves to be worthwhile and less maintenance and headaches than it currently is, I would also make that change to the house… As it is, our neighbors across the street just took down and disposed of a 12 panel array that did nothing but cost them money and stress over the past 5 years or so. In one of the sunniest cities in Canada, that isn’t sounding very promising at the moment on a residential scale.

For me, I’m not necessarily against the Liberals, but I do feel a lot of their policy and focus is in areas that are ridiculous, and possibly just show to appease the area of the country where seat counts are the most dense, but I’m eager to see what they can get done over 8 years instead of 4 years.

I don’t agree. If Trudeau promised to kick down the door and pry handguns from your cold dead hands he’d have got his majority. All from the big cities.
The problem is they just can’t distinguish between a handgun, an Uzzi and a hunting rifle. They talk talk talk about “guns” when the talk should be about “hand guns”.
As for 'all this talk of Wexit", it’s promoted bullshit. Note how their website and merchandise went live the day after the election.

What is it you don’t agree with? I’m replying to why Albertans have an animosity against the Liberals. Removing their firearms is certainly a reason.

The Liberal plan is to work towards a ban on handguns while also banning “assault rifles”, whatever that means. Something just popped up on Google and said there are 900,000 legal handguns in Canada. Given that there are 2.2M PAL licenses that may be true. Put a $750 average price tag on those and you’ve got a $675,000,000 buyback program. I feel 900,000 is a tad high, like probably 10x too high but start including what may fall under the “assault rifle” category (which are already restricted the same handguns), and you can more than double cost of each rifle. I’m willing to bet they’re close to a 3:1 ratio to handguns in volume too. Do that math, that is Billions of wasted money and angry people without a benefit to anyone. The sad part is they’ll likely not pay anyone anything for them, instead allowing the current owners to keep the rifles and handguns until they die. No transfers to family or friends, no cash value, and likely higher restrictions to use them responsibly. It’s a sore spot with me. Shooting and handloading is a lot of fun and completely harmless in the hands of the law abiding citizens that own them.

I’m well aware of what wexit is and the reasons in my reply are why they feel that way, imo.

Handguns are not a problem in Canada, RCMP already stated most of the handguns that are used for crime are smuggled in from the US, the reason for this is that handguns have to be registered, therefore the RCMP can trace the gun back to the owner, hence the smuggling part

Like Herbie said though, people inside of large metropolitan areas don’t know this and don’t care, hence the successful anti-gun campaign in Canada. AR-15s are registered and restricted the same as handguns in Canada and some would argue they’re not as harmful as handguns to begin with since the magazine capacity of all rifles is limited to 5, and 10 for pistols. You cannot take a handgun or restricted rifle anywhere other than the most direct route to and from your registered gun club/range, period. If you get stopped anywhere outside of that route and have either with you, it’s a big problem. That includes proper storage, etc at home with random inspections, so registered owners DO NOT screw around with that stuff.

The entire thing is ridiculous IMO.

The long knives are coming out… 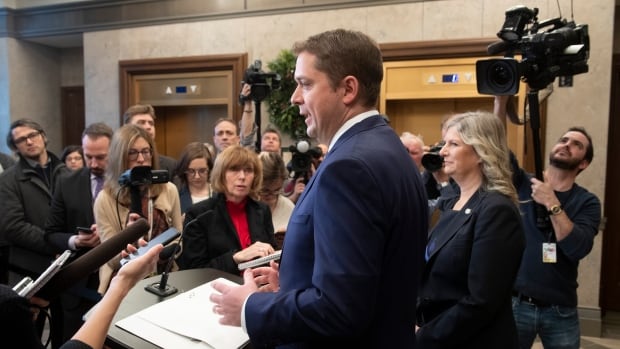 As his foes within the Conservative Party mobilize to get Andrew Scheer out of the leadership well before the spring, Stephen Harper's former campaign director is warning him not to cling to the job.

Me thinks he’s done in April.

Yes. The Cons are gunning for him. He could be done in April. Kenny has a better chance of surviving.

Kenny is no fool he will stay in Alberta and let someone else lose the next election, personally I think Lisa Rait would make a good candidate

Kenny’s popularity has fallen as of late.
50% of Albertans think negatively of him.

Not sure he’s feeling the love out West.

I thought lisa would be a no brainer but she seems to have lost traction.

That didn’t take long at all. 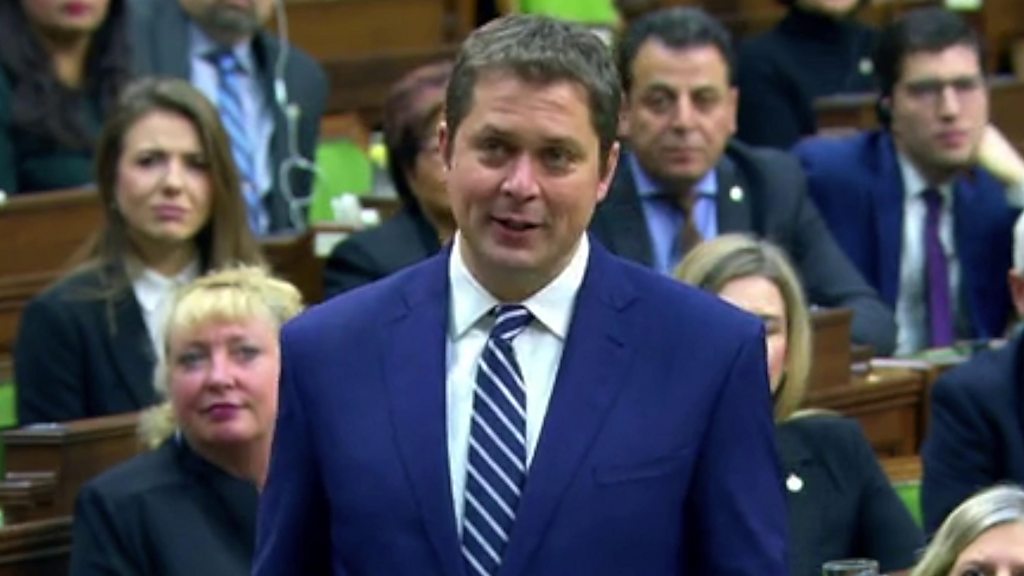 The Conservative leader is stepping down two months after his party's disappointing election loss.