Hmmmmm…I’ve noticed a slight improvement in speed lately.  I wonder if CityWest has done an upgrade?

I over heard them (citywest) talking about ADSL and the fiber optic lines to some guy who was unhappy with his download speeds they told him it should be much better, due to some upgrades.

Ouch.  I would phone up CityWest and ask them about that.

Does everyone else have problems with that Speedtest page loading slowly and moving slowly while you’re doing the tests?  I can’t tell if it’s my system lagging or my connection… or a combination of the 2.

Well… by the results I can tell my connection is a lil on the slow side.  Surprise Surprise!!

I feel sorry for you people 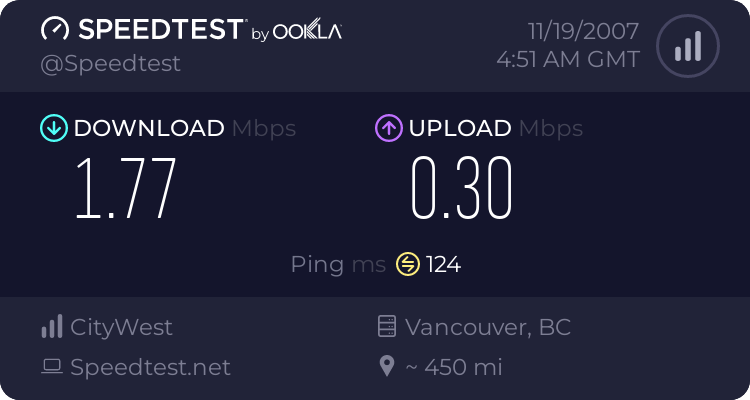 Hmmmmm…I’ve noticed a slight improvement in speed lately.  I wonder if CityWest has done an upgrade?

I’m thinking you are on the Fiber Optic line

'cause your ISP Reads Telus and not Citywest

my speed is great again went down to the office talked to keith said im tired of waiting so he gave me a new number which starts with 69 and goes through navigata and since then my speed has been in the 4.5 megs all the time

Citytel has admitted they throttle at the switch. Pile that ontop of the horrible bandwidth in/out of town. Not much surprise. My bandwidth’s been horrible in multiple locations for at least six months.

You’d think City Hall would make an effort to put a hand into the operation for the better as Citytel is a revenue generator. I mean, the City has their hands in business across the board these days. Really makes you wonder if the city can ever allow another telecom company in - it’s pretty much revenue suicide.

This is the basic package. Full DSL aint much better.

Pings will not be constant because of congestion 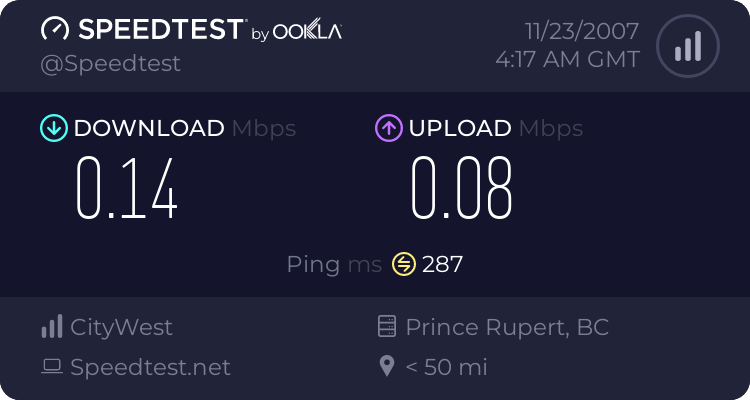